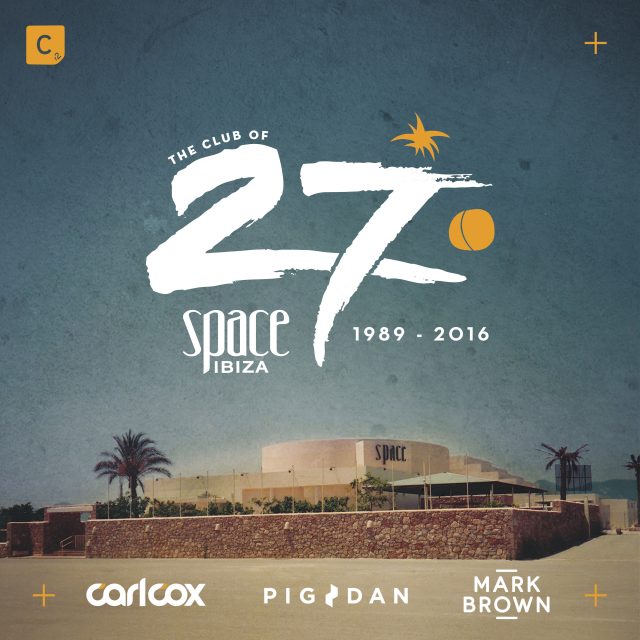 “If there is a mecca in dance music, it goes by the name of Space Ibiza.” – Dancing Astronaut

It all began when club visionary Pepe Rosello first launched the club in 1989 and who was to know what he was about to create. Over the years Space Ibiza became an institution, a mighty one that carved and helped shape the careers of many household name DJs. Space Ibiza’s influence has spanned 3 generations of clubbers and it is the place where the worlds dance music lovers congregate to celebrate the original values of Ibiza – to dance through day and night to the best underground sounds in the world.

Remember this is the place where clubbers first famously cheered every arriving aircraft that used to roar above their heads on the famous terrace. This was to become one of Space Ibiza’s defining features until the terrace was ultimately covered over.

Cr2 records now commemorates this momentous club and pays homage with a new 3 CD Mix and download compilation. The package contains 3 varied mixes that reflect the atmosphere and vibe of its dancefloors, including the legendary main room and the famous terrace.

The first mix comes from one of Space Ibiza’s most outstanding DJs – Carl Cox. Carl needs little introduction and has held a residency at Space for the past 15 years with his ‘Music is Revolution’ party. Arguably Carl has defined and shaped the sound of Ibiza and here he delivers a classic Carl Cox mix celebrating everything that is good about the main room and its outstanding sound system and vibe. Listen out for tracks from Patrick Topping, Deetron, Harry Romero, Christian Smith and a special collaboration from Carl Cox and and Chic’s Nile Rogers.

Mix 2 comes from esteemed and respected techno and tech house pioneers Pig&Dan. Igor Tchkotoua (Pig) and Dan Duncan aka Pig&Dan have both witnessed and been influenced by years of amazing music on the terrace at Space Ibiza. Here they pay respect in their own style delivering a solid and pacey techno mix that includes three special exclusives. Listen out for out for tracks from Vinicius Honorio, Rehmark & Nukkah and Uakoz & Alex Lentini.

The final and third mix comes from the owner and founder of Cr2 Records Mark Brown. Mark has been a long term supporter of what he would consider ‘One of the most important clubs in the world’. With years of experience both attending the events as a clubber then rocking the dancefloor as a headlining DJ, Mark understands the musical ethic of Space perfectly. Marks mix includes a special exclusive from Elias, a beautiful deep and dark tech roller which compliments the mix perfectly. Mark’s mix represents his DJ style and direction for 2016.

Space Ibiza remains one of the most awarded clubs in the world and there is still chance for you to go and experience what it is all about.

Final word from the king of clubs Carl Cox “Next year, the club is no longer,” Carl says. “And that’s a really massive shame. To be a part of its success, and the way it’s reached out to thousands of people worldwide, to come year in year out, as if it were church… it’s gonna be a massive day when its doors finally close.”